The following letter was sent on August 2, 2018 to invited speakers of the “Inflation, Alternatives and Gravitational Waves” workshop to be held September 3-6 at Ariel University. The university is built on occupied Palestinian land in the illegal Israeli settlement of Ariel. Over half those invited to speak confirmed they would not be attending.

We are writing to you as an invited speaker for the workshop entitled “Inflation, Alternatives and Gravitational Waves” at Ariel University, Sept 3-6, 2018. As the Palestinian Federation of Unions of University Professors and Employees (PFUUPE) and the Palestinian Campaign for the Academic and Cultural Boycott of Israel (PACBI), we urge you to cancel your participation at this university, which is built on occupied Palestinian land, in violation of international law.

The settlement of Ariel was built on land stolen from surrounding Palestinian villages and on land Palestinian families have cultivated for generations. The apartheid wall built to annex Ariel to Israel, and declared illegal in 2004 by the International Court of Justice (ICJ), severs Palestinian villages from each other and restricts freedom of movement and their development. Palestinians have to live with the stench of wastewater from Ariel that affects their health, destroys their crops and pollutes water sources.

The settlements, which rob Palestinians of land and resources, are a part of Israel’s system of oppression dominating all aspects of Palestinian life, in particular education.

Since the start of the current academic year, Israel has denied entry or refused to renew visas for scores of faculty members of Palestinian universities holding foreign passports.

The European Union and the US-Israel Binational Science Foundation exclude Israeli academic institutions in the occupied Palestinian territories, such as Ariel University, from grants and research programs.

Earlier this year, Kasetsart University in Bangkok ended its partnership with Ariel University for a Women’s Study Conference.

These measures were taken in recognition of the fact that collaborating with Ariel University necessarily means normalizing Israel’s illegal policies that deny Palestinian rights and stifle Palestinian higher education.

By participating in a workshop at Ariel University, you would be lending your name and scholarship to this end, something we trust you would not want to do.

We, Palestinian academics and human rights defenders, urge you to do the right thing and cancel your participation at this conference in the illegal settlement of Ariel.

We look forward to receiving your reply and would be happy to discuss this further with you.

The Palestinian Federation of Unions of University Professors and Employees (PFUUPE) represents more than 6,000 Palestinian university staff at 13 institutions of higher education in the occupied Palestinian territory.

The Palestinian Campaign for the Academic and Cultural Boycott of Israel (PACBI) was initiated in 2004 to contribute to the struggle for Palestinian freedom, justice and equality. PACBI advocates for the boycott of Israeli academic and cultural institutions, given their deep and persistent complicity in Israel’s denial of Palestinian rights as stipulated in international law. 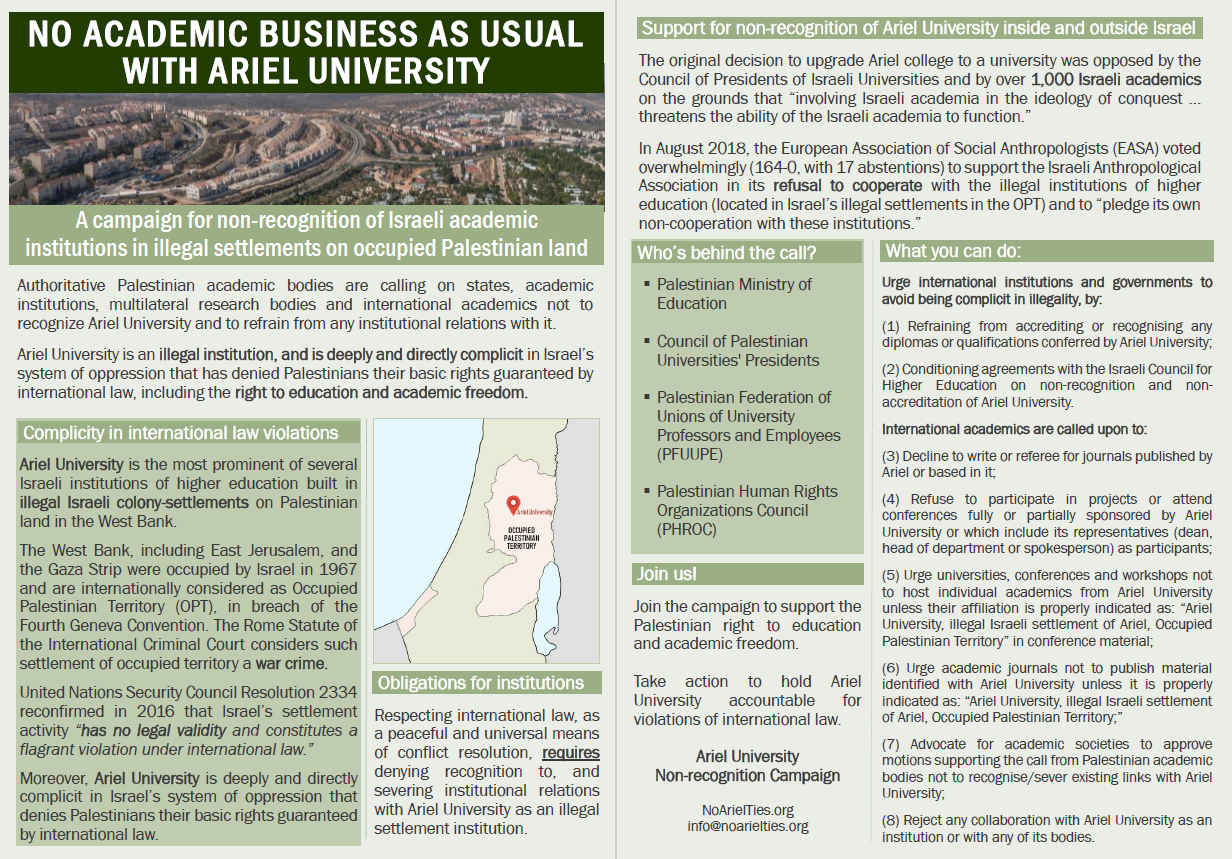